Ben Hecht, like Karen Dow and Christopher Mir, works out of a garage that’s been converted into a studio. (New Haven artists who work out of converted garages, raise your hands!) One of the best things about visiting a studio, I have discovered, is to see works in progress–to be able to visualize how the artist turns a blank canvas into finished work. Here is one of Hecht’s in-progress pieces, after just a few passes.

Here’s another after many more passes.

And here’s a finished piece: 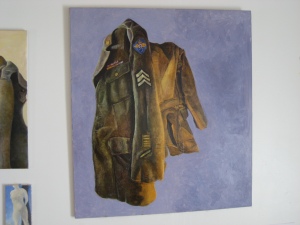 Hecht explained to me (as he did to a previous poster) that in some of his paintings, like the one of the jacket, he’s interested in exploring the difference between fantasy and reality—the truth of what happened versus the stories we make up when we want to fill in the blanks. The jacket was his grandfather’s; he mentioned how difficult it was to square the reality that he’d served with the man he knew, and then to square that again with the image we have of what fighting in war is like. Thus the lighting—one source natural, one artificial. Illuminating things differently.

We can all relate, can we not? My great-uncle served on a destroyer in World War II; he said once he could see the face of the kamikaze coming for his ship. But I remember him in an easy chair, in the hospital. I once worked with a British man, too, who said he’d been a soccer hooligan, a soldier. When I met him, he was teaching conversational English in Japan. Hard to square. Less hard when he showed me one day that half his teeth were false; just flipped them out of his mouth, under some severe fluorescent lighting. But still hard.

Brian Slattery is an editor of the New Haven Review. He also writes novels and plays as much music as he can.