You have 5 more hours to enjoy the wonders of Open Studios—which are open tomorrow (Sunday the from 12-5 PM. The Alternative Spaces @ 196-212 College Street are host to a plethora of wonderment and surprises in storefronts you might not otherwise have a chance to explore. Spaces @  300 George Street and 39 Church Street are also open.

In an old liquor store, Eric Litke is showing polaroids in handmade frames. There is a series of images of the same cross, kids playing video games, diamond signage, and architectural exteriors. If you ask nicely, he might let you use the bathroom behind the bar.

In the windows of this same space are hand-painted signs by Gene Beery—a contemporary of Sol LeWitt who worked as a security guard @ Moma and offers messages like this: Robert Greenberg interprets history through a crocodile’s lens, and behind his space, you can crawl into a space behind a wall, provided you have a sense of adventure, good knees, and you look out for crushed oranges.

This piece was delightful in that it made noise (typewriter, powered by the artists) and smelled great. (Again, those crushed oranges) plus, there was something in the crawling that brought me back to a mental space I hadn’t inhabited since I was small. I like art that engages the senses in ways I wasn’t expecting. This piece makes you crawl under a thicket of tree parts suspended in the drywall, and you might miss it if you aren’t paying attention. Some folks asked me what was happening back there and I replied, “ART?”

Co-op students have transformed a storefront with paint and a visual vortex. Their enthusiasm and willingness to discuss the transformation of the space was excellent.

In SERA, a nail salon of pink and mauve profusion offers a selection of treatments, from an inner beauty treatment, to artist swapping services, manifesto massages, and nail treatments from an attendant behind a pink fabric wall. The place was swarming with photographers, which was slightly distracting, but Albert Municino led my friend Dawn & I through the inner beauty treatment, which was both technologically advanced (there was a powerpoint presentation) and utterly human all at once. We learned new words, imaginary words, and experienced an inner beauty treatment that reduced our fear & rage to manageable levels. I was wondering if I would feel cynical about the treatment, but in fact I felt better when it was over, like a person made open to the possibilities of imagination. Here’s a view into the space from the reception area: 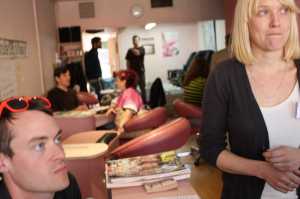 On to the massage/manifesto portion of the day: here is a legit journalist and an artist discussing manifestos? Art? Massage? The wisdom of sharing a pillow with strangers?

I do not like the scent of nail polish, so I passed on that, but did get a totally amazing choose-your-own-manifesto massage from the man behind the installation, Ted, who read to me from the Situationist Manifesto accompanied by a found soundtrack of religious music/sermoning found in the salon at the time of it’s grand re-opening preparations. I tried hard to get an actual journalist Allan Appel to get a massage, specifically the cyberfeminist massage, but he wanted only to witness the experience. In talking about it, I realized it was indeed different from many other artworks I’ve experienced because I wasn’t using my eyes. It was engaging my nose (frankly, the pillow smelled very floral) my ears (manifesto & found Korean tape) my sense of touch (duh, the massage) and not my eyes at all. But of course, Ted said, he was using his eyes. I got my friend Mary to get a massage and we both confessed later to thinking Ted was grand—was it the manifesto that made us happy? Or just the magic of being touched? Did we actually absorb any of the manifestos? We all agreed that we wished we’d been able to tip our humble art servants like one does in an actual salon. 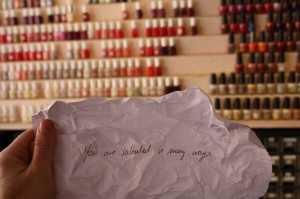 Before we left, we each took a crumpled note from the floor. That made us feel even better about ourselves and our salon experience.

Upstairs, Kim Mikenis displayed off her deliciously colorful artworks, puppetry scripts and outfits, and new work that incorporates the shadowpuppet figures from her shows into art pieces.

Down the hall, I stepped into a camera obscura room built by Colin Burke and watched Crown Street pass by upside down. I sat in the darkness watching the world outside gliding by, astonished and quiet.

I asked Burke if he had a camera obscura room in his house. “No,” he said, he didn’t have a spare room for it. I’d describe it as more compelling than a fish tank, and equally relaxing.

Kevin Van Aelst’s photographs of the mundane turned meaningful delighted a young biochemist on the second floor.  She loved chromosomes and his gummy worm visions of it.

A tower of beercans in another room were visually striking. Sadly I don’t know who to attribute these to. [David Coon – ed.]

I admired Harvey Koizim’s photographs of Farmer’s Markets and wished for an apple image in this season of apples. In another space, I enjoyed one of the other pleasures of open studios, free food. I ate a wee macoun and wandered back downstairs.

There, we chatted with Elvira Ormaechea about painting the lake—or ? I guess we talked about a method of preparing a wooden surface with layers of an ancient primer but it had a really exotic name and I wasn’t taking good notes at this point in the day. I really liked her work, and her name too, obviously. It too is beautiful. Whatever the process was called, we expressed our delight at the surfaces this meticulous process produced.

If you can, get over to the space at the Alternative Space before the weekend is over, I can guarantee you won’t regret it. You can feed your mouth, your eyes, your inner beauty, your muscles, your ears, your heart. That place is bursting with awesome. Here is the sun, bursting with awesome through the pinhole that makes the camera obscura work: 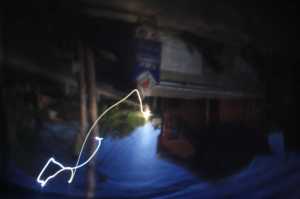